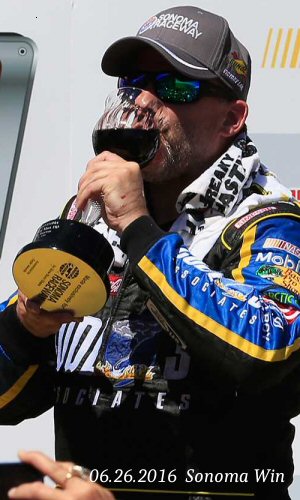 We’re not professional reporters or sports commentators/critics. But both my Man and I are authors and we tend to write our thoughts and musings out on paper (well on the screen).

I haven’t decided how much racing and specifically my NASCAR musings I’m going to put here on Springwolf’s Creations. But we’ll see what happens.

My passionate distraction began when I was rather young, 12 to be exact. My first favorite driver was Darrell Waltrip in his rookie year, 1973. So when I say I’m a long time fan, and it has been a LONG time!

Back then I also watched Indy racing with some big names like A.J. Foyt, Mario Andretti, LeeRoy Yarbrough, Johnny Rutherford and Wally Dallenbach, Sr. to name a few. I simply loved any kind of car racing!

Today my passion revolves around 3-Time Sprint Cup Champion Tony Stewart (Smoke), driver of the #14 Stewart-Haas Racing Chevy. He began his cup career in 1999, his first cup win was at our local track, Richmond and that’s also his favorite track. And he was the 1999 Rookie of the Year.

While I’m still a huge fan of Smoke, he retired from the Nascar series in 2016. It has been hard to find a new driver to fill his shoes, at least for me. I’ve lost my favorite driver and settled on cheering for the drivers of his team Stewart-Haas Racing. But it’s really not the same. ::sigh::

Because of Smoke, we’ve also become very interested in Dirt Racing. I’m still learning about how all that works, but I’m getting there. It’s exciting to watch to say the least! And now that my favorite guy has bought the All Star Circuit of Champions, I’m sure that’s going to expand and grow by leaps and bounds.

Here begins my personal perspectives, thoughts and random musings of racing in general and NASCAR specifically. Its races, drivers, their personalities, triumphs and shenanigans.

My NASCAR Musings Here on my little blog:

NASCAR Musing @ EvilWordsmith
Most of our commentary has had its home on my Man’s blog EvilWordsmith.com. But there are a few items there that are worth highlighting here.

Some of Our Favorite Racing Links:
If you like following racing news and especially if you like Tony Stewart; here are some places to go for information, news or simply people to follow on Twitter: