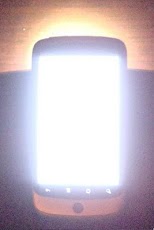 The First App You MUST Add To Your Cell Phone

The most important App you need is a flash light. Seriously, it sounds funny but in addition to coming in real handy during your day to day life, you most definitely need it in an emergency situation.

I have used mine several times in the late evening and even a few times in the day. I can’t always find that flashlight in the utility drawer, but I know where my cell phone is. And it’s dark in the bottom part of the pantry, even with the kitchen light on! I use it in the house for little things, like plugging in the power cord in the power strip under my desk. Or looking for the splinter in my son’s finger.

It’s handy for Concerts, finding your way through the driveway when you’ve forgotten to turn the porch light on before you left the house. Or looking for that quarter you dropped in the floorboard of the car.

I use mine to get up the stairs after we’ve turned all the lights out for bed. Or when my son needs help at night and wants a light. It’s closer to the edge of the bed than the lamp is after all.

But what made me want this first off the bat were the stories I remember hearing from people running down the stairs in the 1st Trade Center Tower on 9/11. You NEED a light in emergencies. So many people who were blessed with coming out of that building said they couldn’t see. The emergency lights didn’t come on, or the light wasn’t strong enough to get down the stairways quickly. Everything slowed down because no one could see.

I looked at several Flashlight apps before I downloaded anything. Most all the lights out there have some form of adware, or they want permissions they don’t need to turn on the light. I ended up finding two that seemed worth the download and giving a try.

Brightest Flashlight by GoldenShores Technologies: -☆
This WAS my favorite flash light app. Then they updated it. Now I strongly suggest you avoid this like the plague! It was bad enough that they added ads to the app, but in doing so, they also added code that infringes on your privacy. It sends data about you and where you are to 3rd party advertisers. That drains your battery like crazy. I used to have 5 stars for this app, now make that a negative 1!

Droidlight LED Flashlight by Motorola Mobility LLC. : ☆☆☆☆☆
Requires NO special permissions. It only requests access to your camera. Now don’t be concerned about this. After some investigation I discovered that in order for an app to control the LED on your phone, it has to “go through” the camera app. to turn the flash (the LED) on and off. Like other apps, it turns on the LED and displays a light bulb on the front. Tap the light bulb and the LED turns off, and the soft light blub remains.  It’s my new favorite flashlight app. It worked great on my old Galaxy Nexus and equally as well on the Galaxy S5.

Don’t wait till you really need a light to get one. You might be in a place where you don’t have a signal and can’t get one downloaded quick enough.