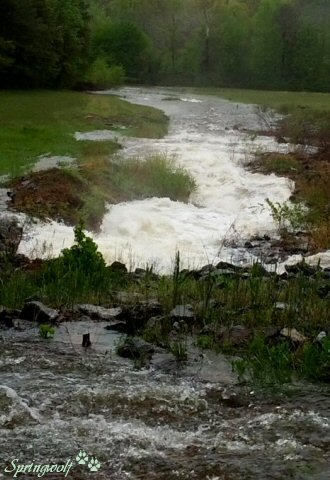 PBS NewsHour declared it as “Slow-moving storm drowns parts of Southeast with record rainfall”. Torrents of rain caused severe flooding in parts of the Florida panhandle and coastal Alabama. Some parts of Alabama saw up to 26 inches of rain in 24 hours, and powerful thunder and lightning storms overnight knocked out power to thousands. Also, a train carrying crude oil derailed and caught fire in downtown Lynchburg, Virginia.

Here in Virginia the rain was torrential for several days. It moved into the commonwealth April 28th on an early Tuesday morning as a nice spring rain. Washing away the pollen and bring some much-needed rain.

At times the gentle sprinkles gave way to a calm relaxing rain. Nothing unusual for this time of year. But it never stopped. It never gave way to brief moments of damp humidity that so often comes with rain in the Old Dominion.

As the afternoon wore on, the rain fell harder and lasted longer in its downpour. We began seeing streams of water build up on the sides of our yard and flow down the small hill to the lake at the end of our property.

Then the winds came. Tornadoes had touched down through the regions where the storm had already crossed the south and south-east. Now it was in our backyard. We watched as the rain-soaked trees bent over to the east against the strong wind. Worried if we would be facing a disaster of our own when one of the giant oaks or pines falling upon the house. Thankfully we were spared that night. END_OF_DOCUMENT_TOKEN_TO_BE_REPLACED