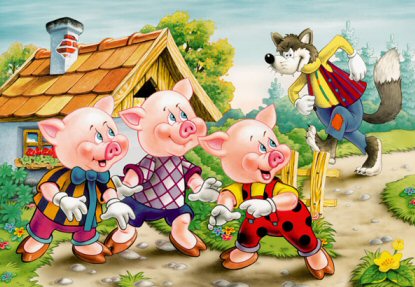 The Moral Of The Story

According to Wikipedia:
A Fable is a literary genre. A fable is a succinct fictional story, in prose or verse, that features animals, mythical creatures, plants, inanimate objects or forces of nature which are anthropomorphized (given human qualities such as verbal communication), and that illustrates or leads to an interpretation of a moral lesson (a “moral”), which may at the end be added explicitly in a pithy maxim. A fable differs from a parable in that the latter excludes animals, plants, inanimate objects, and forces of nature as actors that assume speech and other powers of humankind. ~ Fable

The most well-known worldwide fable is the Three Little Pigs and the Big Bad Wolf: END_OF_DOCUMENT_TOKEN_TO_BE_REPLACED