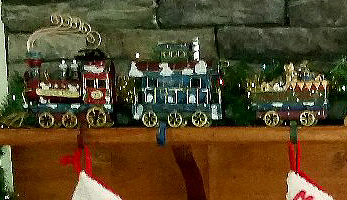 When my son was little, decorating for the holidays suddenly became more fun. Like a lot of little boys, he loved trains! When he was about 4, I found the perfect stocking holder set, a train! The set has become one of our holiday traditional decorations to put out on the fireplace mantle each year. When we moved from Virginia to North Carolina, we also had the chance to bring my husband’s oldest son into our celebrations. Which meant we needed another train car for the additional stocking. Finding another car to go with our existing train wasn’t easy and we were forced to find an alternative during that first holiday. Thankfully he’s 20 years older than our son, so he wasn’t offended But I’ve made it a mission to find an additional train car to go with our existing set. Enter eBay!

Here’s what I’ve found out about our train set. They’re rare and they seem to be VERY popular! Two things that create challenges for eBay buyers. It means they’re not listed very often. And they’re often very expensive! This year, 2019, there’s an Egg Nog car listed for $325 and the current bids are over $420. Wow! Still I’m determined. I’m hoping to find the Santa and one of the tanker cars to add to my set.

Christmas Express Train Stocking Holder Set
This is a cute hand painted metal train stocking holder set. One of the things that indicate this set is hand painted, are the small variations in paint between car to car. For instance, I’ve seen pictures of the caboose online, where the pole behind the turret is mostly red with white stripes. Mine is mostly white with red stripes.

The Train was sold by Target, sometime between 2004-2006. The set was sold in a 3 car box, that included the Engine, Toy Car and Caboose. Additional pieces were available, but were sold separately. The entire train set is 7 pieces and includes a steam engine, a coal/toy tender car, a passenger car, a Santa box car, a Hot Cocoa tanker car, an Egg Nog tanker car, and a caboose.  Each car, except the engine, has painted blobs on the roof and sides that look like clouds, but I suspect they’re supposed to be snow. And each car has a large J hook for the stocking. The manufacturer is unknown, it’s not listed on any of the cars, nor does it appear on the box the trains came in. There are usually stickers on the bottom of each car indicating the set was made in China. Each car weighs about two pounds with the toy tender car slightly over two pounds.

The Steam Engine:
The red Engine sits 8″ tall, 4″ wide and 9″ long. It carries a round medallion marked with the number 25 under the conductors window. The engine is decorated with evergreen wreaths and white bows. Streams of gold smoke comes out of the red and blue smoke stack, and end with little stars at the end of the flow. The name plate on the side of the engine says Christmas Express. The train base is dark red with gold wheels. The hook is also dark red, matching the engine itself.

The Toy Tender car sits 5 1/2″ tall, 4″ wide and 6″ long. The car is green with a yellow and red decoration on the top and back of the car. It has a blue accent stripe on the bottom of the car, and sits on top of a red train car base with gold wheels. The hook is green and matches the paint on the tender box. Written in red on the side of the car is Christmas Express. The Tender has several wrapped box presents, a Christmas tree, a stuffed bear and what appears to be a stuff dog. There’s also something that looks like a bird house and block with a letter on it.

The Passenger Car sits 8″ tall, 4″ wide and 8″ long. The car is red with a blue roof, that has a red accent around the edges. Written in gold on the side of the car is Christmas Express. The front and back of the car has a pretty gold railing. And the car sits on a green train car base with gold wheels. The hook is red and matches the color of car.

The Santa Box Car sits 6 1/4″ tall, 4″ wide and 8″ long. It has Santa Claus with his arm around a snowman sitting in the doorway of the box car. Inside the car are Christmas trees as the train heads toward the North Pole. To the left of the door is a brass railed window. To the right is a red wreath handing on the side of the car. The Box sits on top of a dark blue (or black) train car base with gold wheels. The hook is black.

The Egg Nog Tanker Car sits  8″ tall, 4″ wide and 9″ long.  The tanker is a dark red, with a red ladder wrapping the side to a yellow turret lid. There are two yellow accent strips beneath the round section of the tanker. And the whole thing sits on a blue train car base with gold wheels.  The hook is blue and matches the tanker’s base.

The Caboose sits 8″ tall, 4″ wide and 8″ long. The car is blue and displays Merry Christmas in gold lettering on the side. The roof is red, with a blue accent and a cap with 3 round windows. Sitting behind the cap is a red and white striped pole. And there’s a red door on the back of the car, with a gold railing. It sits on a dark blue train base with gold wheels. The hook is dark blue and matches the color of the car.