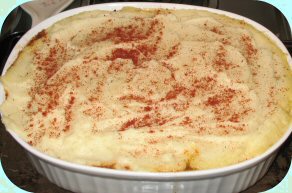 According to the Encyclopedia Britannica, Bangers and mash, is a common British dish consisting of sausages (“bangers”) and mashed potatoes (“mash”). And is traditionally served with onion gravy.

Bangers and mash is a staple of the country’s overall cuisine and is a popular pub dish. The term bangers supposedly originated during World War I, when meat shortages resulted in sausages’ being made with a number of fillers, notably water, that caused them to explode when cooked.

The sausages may be pork, beef, or lamb, but one of the most traditional meat sticks is Cumberland sausage, a coiled pork sausage from northwestern England.

This is a traditional recipe that we’ve tweaked just a little to our own Americanized taste.

Preparation Time: About 1 to 1½ hours
Serves: 6

Prepare the dish for baking