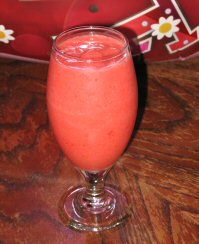 Named for Confederate spy, James Welty, whose code-named was ‘Daiquiri’, this sweetly cold treat has become a favorite of many in the south and beyond.

Our son Aidan, had his first virgin strawberry daiquiri in 2007, at one of our favorite restaurants, Smokey Bones. His thirst for this fruity drink has caused us to find out how to make them at home. Thus we went on a search for traditional recipes. In our search we found a little history about the creation of the traditional southern Daiquiri drink and we’re sharing that story below.

Adapted from “The Real History of the Strawberry Daiquiri” by Michael Hillman
During renovations at Windy Meadow Farm, turning the old summer kitchen into a library, it was necessary to tear down one of the original walls. Much to my surprise, the falling plaster revealed a package securely stowed between two beams. Intrigued, I reached down and carefully unwrapped it. Inside was a bundle of hand written stories and a carefully sealed envelope, on which was written the following:
Folklore: The blending of historical and ludicrous facts, often the result of delusions brought about by the fermented juices of sugar cane.
Within that bundle, comes the story of the Strawberry Daiquiri:
It all started in June 1863. Christian Zacharias, who had inherited Single Delight, the family farm, was carrying on the family tradition of ice cream socials. Christian and his neighbors worked feverishly to bring in the year’s first cutting of hay. With the hay safely put away, Christian and his friends gathered at the appointed hour in the woods next to his mother’s old strawberry patch, which his wife Sarah was now tending.
A keg of rum stamped with a Royal Navy seal dated 1813, was tapped and a portion of its contents passed around to all the celebrants. Being prohibitionists by nature, the rum brought on much coughing, gasping, and throat clearing.
During that evening it was supposedly suggested by someone who fruit should be added to ‘smooth’ the taste of the rum. All eyes turned in unison, to the well-tended strawberry patch. Christian hemmed and hawed. Stealing away and drinking rum with his friends was one thing, but plundering his wife’s strawberry patch was another. Especially if they were going to be added to the rum. The rum however got the better of him, and within minutes of giving his go ahead, the group descended upon the patch like locust upon a wheat field.
Once securely back in the woods, the strawberries were mashed and mixed with the rum and ice. The addition of the strawberries met with everyone’s approval, and over the ensuing evening, the quantity of the various ingredients were altered and tested to produce the ‘perfect smoothness’. As the evening progressed, the conversation turned to the war and the talk of Lee’s intended invasion of Maryland and the Union’s intention to block the advancement at Emmitsburg.
Unbeknownst to the party participants, James Welty had been recruited as a spy for the Confederacy. Because of his handsome appearance, and debonair style, he had drawn the attention of the French officers advising General Lee and was given the code name ‘Daiquiri’ by them. While James’ neighbors fell under the influence of the rum, James sat back and listened, gathering valuable intelligence on local food supplies, foraging conditions, union troop strength, and possible union fortification sites.
The final recipe for the strawberry rum drink invented that night would have been lost to antiquity if not for the efforts of James Welty. Being the only one sober of mind throughout most of the evening, James recognized a great business when he saw one, or in this case, drank one. James wrote the final recipe down, shoved it into his pocket and then joined the others in polishing off the rum.
Unfortunately for James, the rum obliterated his memory of all the intelligence he had gathered on the union positions around Emmitsburg and Gettysburg. Without his vital information, a frustrated Lee proceeded into the North blind, and stumbled into Gettysburg. Following the defeat at Gettysburg, their paths crossed one last time, Lee’s only comment to Emmitsburg’s Confederate spy was “Gettysburg, the war, all lost because of Strawberries, Daiquiri?”
A disgraced James returned to the south where, to make ends meet, he began marketing the strawberry and rum mixture under his code name: Daiquiri. It became an instant success. The fortune James made however was short-lived. The collapse of the southern cause, and with it the Confederate currency, erased all his profits. The Strawberry Daiquiri, however, lived on, and as we know, became the mainstay of many a Southern social party.
Before he died James passed the original recipe for Stony Branch Strawberry Daiquiri onto his niece Mary A. Welty, who in 1888, purchased the windy meadow upon which lay the strawberry patch planted by Mary Zacharias one hundred years before. Before selling her home to James Schealy in 1918, Mary documented for prosperity, the above story and sealed it in a wall, along with seeds from the original plot and a treasure trove of other memorable stories and folklore.