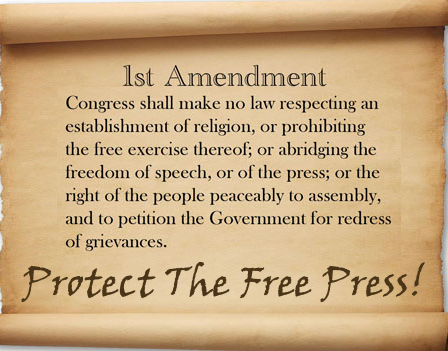 Today, August 16th, 2018 is the national day to support America’s Free Press. The idea began with the Boston Globe proposing that all Newspapers Rally To Protect The Free Press. The coordinated effort for an editorial response from publications across the U.S. to President Donald Trump’s frequent attacks on the news media.

Beginning as early as one month after being sworn into office, Trump labeled the News Media “The Enemy of the People”. According to the Washington Post, he has “used the word “fake” — as in “fake news,” “fake stories,” “fake media” or “fake polls” — more than 400 times” in the past 19 months.

He constantly tells his followers at rallies, that you can’t believe the “Fake News”, and “what they say is going on, isn’t what’s really happening”. All this to undermine the credibility of ethical and factual reporting that is critical of his actions, both past and present.

The Dangers
The biggest danger of this Trump campaign, is that it’s working. More people believe America’s news organizations than this lying President. But that percentage of trust, is declining.
“Americans’ trust and confidence in the mass media “to report the news fully, accurately and fairly” has dropped to its lowest level in Gallup polling history, with 32% saying they have a great deal or fair amount of trust in the media. This is down eight percentage points from last year.” – Gallop Sept 9, 2016

Then there’s the moral question, that the continual rhetoric from this President is putting Journalists at risk for violence. Many point to the killing of five people who worked at the Capital Gazette in Annapolis as an example. The man charged with the shooting, cited his displeasure about stories the Gazette had been writing about his own criminal activities, calling them false reports. Certainly a sentiment shared and pushed forward by this President’s own rhetoric.  To the detriment of his claims, the stories written by the Gazette have turned out to be accurate.

Threats To A Democracy
Controlling the press and the narrative of events is a key step in creating an authoritarian regime. In “Italy in the 1920s, Germany in the 30s, East Germany in the 50s, Czechoslovakia in the 60s, the Latin American dictatorships in the 70s, China in the 80s and 90s – all dictatorships and would-be dictators target newspapers and journalists”. – reported The Guardian. Adding “They threaten and harass them in more open societies that they are seeking to close, and they arrest them and worse in societies that have been closed already.”

There’s no doubt that Trump’s marketing skills benefit his worst characteristics to control any and all narratives. Branding people with degrading names, using marketing type phrases like “fake news” to distract attention from honest and fact based reporting are all the same types of communication control. While all Administrations, and even Corporations use these techniques, they haven’t been used to the deceptive extreme employed by this current Administration.

Fact checkers spend more time tracking the lies of this President and his surrogates, than they do any truths that come from their Press Secretaries. Trump seems to be incapable of telling the truth, as evident by his own lawyers who refuse to allow him to be questioned by the DOJ’s Special Counsel. Citing that such questioning is a “perjury trap”. Let’s be clear, any testimony given to any Prosecutor is expected to be truthful. If you’re afraid of a perjury trap, then you know the story your client will tell a prosecutor is already untrue and your client will be committing perjury.  Allowing this as a defense attorney makes that attorney as equally guilty of suborning perjury as their client. So they cannot allow the client to testify, period!

So Trump’s only real option is to undermine the ethical and factual reporting of the News Media who, as professionals, are very good at chasing down the truth and holding our Political Leaders accountable for their actions and crimes against the state.

The Founding Principle of A Free Press
From the very beginning of this Union, our leaders knew and understood the value of a Free Press. “The basis of our governments being the opinion of the people, the very first object should be to keep that right,” Jefferson wrote to Edward Carrington in 1787. “And were it left to me to decide whether we should have a government without newspapers, or newspapers without a government, I should not hesitate a moment to prefer the latter. But I should mean that every man should receive those papers and be capable of reading them.”

When people talk about Constitutional Freedoms, they often point to the writings of Thomas Jefferson. Which makes sense, considering he wrote the first draft of the Constitution. But he never put those rights on paper in a vacuum.

“Just before Jefferson wrote the Declaration of Independence in 1776, fellow Virginian George Mason championed a free press in that colony’s Declaration of Rights. He said it was something that “can never be restrained but by despotic governments.” (In a “despotic government,” one or a few leaders have all the power.)” – quoted The Washington Post, Mar 14, 2017

James Madison didn’t feel the new Union needed to protect individual rights specifically. He felt the Constitution put forth those rights clearly enough. After debate and consultation, Madison finally conceded the argument and agreed to come up with amendments to protect citizens’ rights. He included this as the First Amendment to the U.S. Constitutions:
“Congress shall make no law respecting an establishment of religion, or prohibiting the free exercise thereof; or abridging the freedom of speech, or of the press; or the right of the people peaceably to assemble, and to petition the government for a redress of grievances.”

Congress approved the amendment and the States ratified it by December 1791. That these ideals were seen as the most important set of rights of the American people, can be attested to in its status as the very first amendment of our Constitution.

Support Our Free Press
Today those rights are under assault by an Administration that doesn’t value the Constitution, the Rights of the People, and the History of this Union.  Trump’s Administration continues to prove to us every day how they view our democracy. As story after story is released concerning their corruption, conspiracy with foreign enemies and the continued attacks on our rights, including those for a Free Press.

This assault cannot be allowed to continue. The degrading of our Constitutional Freedoms can not be sustained if we are to hold onto our Democratic Republic. Every citizen of this Union must speak up for our Free Press, or we lose our own voice to demand a Government by and for the People!

Make Your Voice Heard
You can make a difference. Your voice is equally important, but it must be heard by your Congressional representatives. We cannot be complacent and hold the view that our voices don’t matter. That’s how we got into this mess to begin with.

In today’s digital age, responding to a Tweet or making a comment on Facebook isn’t going to get the job done. Your congressional representatives don’t read those sentiments and they certainly won’t respond to them.

You must take a more active and direct role in communicating with YOUR representatives. And because of this digital age, that’s easier to do than ever before.

My suggestion is to use a bot; a piece of sotfware that can execute commands, reply to messages or perform routine tasks, online or through an app.

Resist.bot is a free service that helps you identify your political representatives, provides a mechanism for you to write to those representatives and will send your messages to their Congressional offices.  There are no downloads, or apps required.

You can use the service online at their website. Or for those of you on the go or who are looking for convenience, you can simply use your cell phone and text your comments from anywhere.  This is my preferred method.

In today’s technological world, there’s few things easier in making your voice heard. Make a difference! Participate in your own Government and the future of not only yourself, but of you children and their children as well!