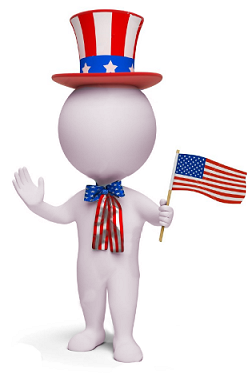 Memorial Day, originally called Decoration Day, is a day of remembrance for those who have died in service of the United States of America. Waterloo N.Y. was officially declared the birthplace of Memorial Day by President Lyndon Johnson in May 1966, it’s difficult to prove conclusively the origins of the day.

Regardless of the exact date or location of its origins, one thing is clear – Memorial Day was borne out of the Civil War and a desire to honor our dead. It was officially proclaimed on 5 May 1868 by General John Logan, national commander of the Grand Army of the Republic, in his General Order No. 11. “The 30th of May, 1868, is designated for the purpose of strewing with flowers, or otherwise decorating the graves of comrades who died in defense of their country during the late rebellion, and whose bodies now lie in almost every city, village and hamlet churchyard in the land,” he proclaimed.

The date of Decoration Day, as he called it, was chosen because it wasn’t the anniversary of any particular battle.
~ USMemorialDay.org

Today Memorial Day is marked by Americans with various form of observances. Honoring the fallen at solemn ceremonies. Parades to honor both those who serve and those who have sacrificed. Family cookouts to remember those close to home who served, past, present and even future members.

NASCAR (my favorite sport), spends the weekend honoring all of America’s Service members at the annual Cocoa Cola 600! It’s one of the biggest patriotic events from any sports league in the U.S. Second only to 4th of July, and even then, it’s NASCAR who steps up to show their support for our troops.

This year, NASCAR is honoring the fallen in a number of ways through out the entire weekend. But predominantly by placing a soldiers name, on each of the series cars in both the Xfinity race on Saturday and the Sprint Cup race on Sunday. Additionally they are sharing the soldier’s story and promoting their recognition through their Twitter (@NASCAR) account.

My favorite driver, Tony Stewart #14 will be carrying Aaron Torian on his car this weekend.

The recognition makes us so very proud to be a fan of NASCAR and all of its drivers. Especially my favorite team Stewart-Haas Racing. The recognition is only part of the story of what they do and how they honor our Soldiers past and present. See how NASCAR Salutes our troops for more.

We Celebrate Memorial Day This Weekend!
We give our thanks and gratitude to all of
the Men and Women of the Armed Forces,
Along with all of our Animal Soldiers who serve at their side,
And each member of their families!!
We honor those who protect our Country and our Freedom
Past, Present and Future.
Thank you for your service and your sacrifice.