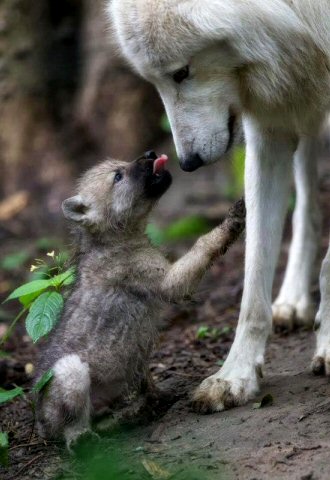 As with most things in this world, the evolution of the Wolf is up for debate. Biologists believe the wolf evolved from primitive carnivores known as “Miacids”. These prehistoric creatures ranged in size from something equivalent to a gopher up to a large dog. 52 million years ago is a long way back to start the history of the wolf we know today. But to understand the wolf, you should understand its history.

Robert Wayne (a researcher from the University of California) suggests a number of wolf like species evolved from a common canid. The following is a piece of his synopsis.

Canis lupus got its official classification from a Swedish scientist named Carl von Linne in 1758. The name can be loosely associated to Carl’s own surname. In Latin, Carl Linne becomes Carolus Linnaeus, thus Canis Lupus was a born label for a magnificent creature.

Sub-Species:Sub-Species can be divided into two categories. First, the most common classification of wolves prior to 1992, defined 24 different sub-species or racial groups. However, in 1992 at the Northern American Wolf Symposium, and based largely on the research of taxonomist Ron Nowak, a new classification of 5 groups was created. Here are both categories:

ª Indicates an extinct species. Followed by the year it was classified as extinct.

Sure is a lot of stuff to say wolves evolved into a variety of breeds. But at least it has some science behind the statement.