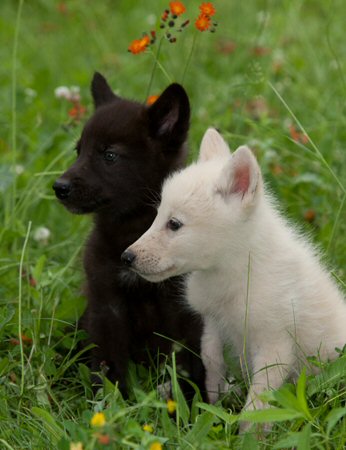 Working With The Right Energy

As you can tell by my Shamanistic name, the wolf is VERY important to me personally. It’s also one of the more common animals that people want to associate with as an animal guide, along with Dragons and Panthers.

I have composed this posting based on my experiences and the teachings of my Shamanistic tradition for those wishing to work with the Wolf.  I suggest reading The Wolf As A Spirit Guide to help put all this in context.

First thing to learn before working with the wolf spirit and their magik, is what their spiritual purpose is. Each wolf comes to this plane of existence with a special gift of knowledge, just as we humans do. But unlike us, they (and most animals in the universe) are much better adapt to living within the balance of  physical nature and with the flow of natures energy or spiritual energy.

To work with the wolf, one needs to understand how the universal energy is connected to each wolf and move forward from there. The following is a brief explanation of this concept of magik and how you can align yourself with the right use of energy.

Wolves are considered by many Shamanistic traditions (not all) to be the highest animal in the spiritual plane. Keep in mind that Shamanistic cultures are world wide and not all hold the same beliefs. For instance, here in the U.S., Native Nations in the northern plains honor the Buffalo, nations in the north east honor the eagles and Nations in the mid-Atlantic and south east honor the Wolf.  Which makes sense when you consider the wolf was abundant in its population within the Appalachian mountains 200 years ago.

To these and other cultures around the world, Wolves are the teachers and guardians of balance in nature within the Divine Universe. They are the spiritual messengers in animal form, between the Great Spirits and incarnated beings.

Depending on their color, they teach different lessons and share different knowledge with those they watch over and walk beside, whither in spirit or physical form. Coloring is used as a means of spiritual classification for one basic reason. Energy, all energy contains several properties or traits that define its characteristics. Energy has a sound that can be recorded, an ‘energy level’ or movement that can be measured and a color that can be perceived and photographed.

For instance, place your hand on a stereo speaker and play a song. Do you feel the speaker vibrate with different variations based on the note being heard? Watch the flames of a fire. The intense or hottest part of the flame is white, or very light blue. The “cooler” portion of the flame is more red or orange. Each component has a different temperature, it resonates with a different movement and it appears as a different color.

Attaching an energy or purpose to an object, or an animal based on their color is not a new concept. It’s as old as time. A black cat is seen in the west as being bad luck. A white anything is seen as pure or Divine. But life isn’t really that “black” and “white”. Black doesn’t necessarily mean negative, and white doesn’t always mean Divinity. So keep in mind the following is based on my spiritual tradition and there are many other correspondence lists out there.

Within the wolf community, each breed shares a lot of common energies, as outlined by Ted Andrews in his book Animal Speak. Snow wolves vs. the Mexican wolf for instance hold similar characteristics. But each one has its own set of specific energies. Learning the specific energies for the individual guides within the pack are also helpful when working with wolf magik.

These primary colors govern all shades of the wolf kingdom. Light colored wolves, would fall into the White Wolf category and so on.

3 thoughts on “Spiritual Classifications Of The Wolf”