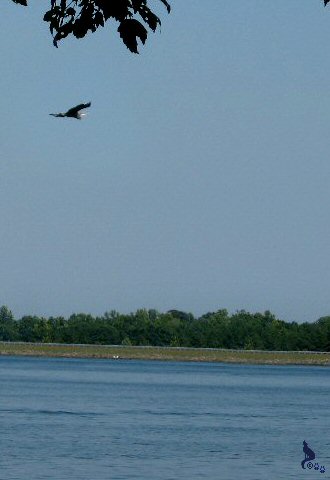 Living On The Water

Living on a lake means we have a diverse variety of animal visitors. Of course we have the usual Ducks, Herons, Cranes, Opossums, Raccoons, Wild Cats, there’s even a Bobcat or two around here. We’ve seen them in the early hours of the morning when the fog is flowing off the lake, over the dam road and down into what we call the dam valley. Our community lake is man-made, as most lakes in Virginia are.

We have Deer of course, a few nesting pairs of Bald Eagles, Red tail and Red shoulder hawks of course. We’ve seen a large Barn Owl once. Heard other owls at night when the neighborhood gets quiet. Bats, who we actually really like because they eat the bugs that make it hard in the depths of summer to sit outside and enjoy the evening by the water.

As with most places, we’ve got the typical song birds, hummingbirds and finches. Cardinals and Bluejays who like eating the cat food we put out for the wild cats that come to visit. What they don’t devour, the opossums and raccoons finish off.

We’ve recently been visited by some Osprey who decided to make this their summer home. It’s truly awesome watching them dive for fish. They make one heck of a splash and always seem to come up with a good catch.

The lake itself has big mouth bass, cat-fish, trout, sunfish, and a couple of other species we’ve never seen. There’s a new deposit of sterile cod added a few years ago to help maintain the lake weed/grasses that grow. Oh and we can’t forget the freshwater mussels and the guppies.

I like the guppies and the sun-fish. The Man calls me Ellie Mae Irwin. Elly May Clampett because I’m always feeding the wild animals. And like one of my heroes Steve Irwin, I’m not really afraid of animals. I have a healthy respect for them, but I’ll talk to, visit with or attempt to pick up anything for the most part.

He seems to like using my efforts to feed the fishes as an example of all this. But hey…people go to Asia and pay good money to have fish eat the dead skin off their feet and legs. We get this for free! So why shouldn’t we give them something in return?

Feeding The Guppies by Springwolf ©

About 3 years ago, we were visited by a very large flock of white swans migrating during the early part of winter. Now that was an interesting site to see, over 100 Trumpeter Swans arrived, spent the night and were gone by the morning when we got up at 7am.

We have some large turtles living in the water and a number of water snakes. The ones we see most often are called American Water Snakes and they’re pretty kewl looking if you ask me. This one lives by our dock and often suns himself in the far reaching branches over the water. Every now and then we find a long snake skin tangled up in the dry rocks by the dock. I always look for him in the bushes when we go out to float. He simply sits there and watches us wade out into the water with our floats. Once we’re out there, we might hear him plop into the water and see him slither across the top of the surface as he moves out to go fishing. He always keeps his distance from us, though each year he does get closer to us as we float. We can see his head sticking up above the water and then he quickly submerges and disappears for a while.

Our Adopted American Water Snake
He lives by our dock.

Speaking of snakes, we found a pair of worm snakes living under a cinder block we were moving from one place in the yard to the next. Well I shouldn’t say “we”. The Man put a pair of locks in the middle of the backyard so he and his brother could deep fry a turkey for Thanksgiving one year. It was a good turkey. But the blocks stayed there for quite some time. Finally I asked if he was ever going to move them? One Saturday we were working in the yard when I went to move the blocks. So kewl, lookie what I found! I immediately picked them up and put them in my lap on my shirt. the Man says “You know I don’t know what to do if they bite you other than call 911”.

And while we’re sort of talking about the floating in the water, we’ve seen the Great Blue Heron nearly every summer. He flies from one dock on our south side of the lake and makes his way across the way to another dock on the north side. Occasionally we’ll see smaller cranes or heron fly by. They are much smaller than the Great Blue. They actually look like baby Herons, but I’ve since learned, they’re not. We’re still trying to get a picture of them so we can compare their pictures.

The Bald Eagles however seem to keep their flight patterns within the trees most of the time. Once in a great while we’ll see them fly over the lake in the late afternoon. And that’s when they like to go fishing. It’s pretty neat seeing them dive for fish too. But we see them in the winter much more often than we do in summer. I have yet to get a really good picture of one of them. But I’m trying.

And then there are my most favorite visitors. The Crows who stop by from time to time, or always seem to be around when I’m taking my walk. Even when we see the as we’re driving out to go somewhere or on our way back home, I try to say to say Hi. But they’re an illusive bunch. I’m working on them though.

It takes some effort and a great deal of patience for the animals to trust you enough to not run off when you talk to them through the window. And even more trust is needed for them to remain close by as you open the door, or if you can get outside to get a picture. Some animals take much more time to realize you’re bringing some food, and then more time to realize you’re only going to take their picture.

The Crows figured out the food part almost right off the bat. That story started this week, so I’ll save that for another post. But within 3 days they I’ll come outside with a little bit of dry dogfood to share with them in the morning. And they’ll caw and chat and spread the news with their murder until they’re all here.

The Opossums and Raccoons, they understood the nightly food thing from the get go of course. It was the patience and understanding that I’m not going to hurt them that took time. Momma Raccoon was inured some how several years ago. But the damage to her left eye makes it a lot easier to recognize her. She always comes by from spring to fall. I love seeing her come by in the spring with her new nursery of babies. 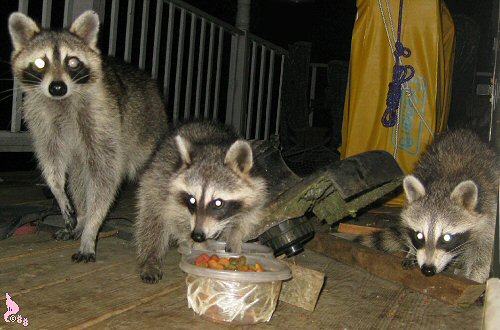 A Murder of Raccoons by Springwolf ©

You may not think the Opossums were the easier of the two to make friends with. But it only took about a week for me to get outside on the porch to sit with her/him on the top step. At first I started by staying in the house with the lights off and the porch light on and I talked to ‘him’. Two days of that and I talked to him and opened the door. He almost left, but when I didn’t open the door any further, he came back to eat. I was able to get the camera out the door and take a picture. Two days of that and I was able to get the door open far enough that I could step out.

I learned that if I didn’t look at him when I stepped out, he seemed to think he was invisible and I didn’t see him. The next night I talked to him, opened the door slowly, stepped outside slowly and closed the door behind me. Then I took a step forward and I was surprised he didn’t move. I stepped forward again until I stepped down on the top step of the porch. He backed up and a little away from the food, but he didn’t leave. When he started eating again. I stepped down to the next step. He didn’t even flinch. Then, I sat down and looked at him. He froze, but he didn’t leave. After about 30seconds or maybe a minute, he started eating again and I started talking to him.

Here’s the part that will make some people; especially some of my relatives, cringe. I did this same routine for 3 nights. On the 3rd night I sat with him for a little bit and when he turned his head away from me to eat, I reached over and gently ran my fingers down his neck. From behind his ears to the top of his back. He didn’t even seem to notice. So I did it again. Nope, nothing. So I did it again and he looked up at me. That’s when I took this picture.

Every time before that night when he was ready to leave, he walked away toward the far side of the porch and hopped down. The porch at this spot is only about 2 steps above the ground. But on this night after petting his neck, he walked down the step right next to me and sniffed my pants and toes as he left. I must admit I hoped he wasn’t planning to make a meal of my little toe for a second. But no worries. He went on his merry way and I went back inside. I didn’t see him for a while after that. We still have opossums come by to visit, but this little guy would have grown up and it’s hard knowing if he has been one of the returned visitors. But I still they’re so ugly that they’re cute.

Now the skunk..they’re adorable. Until you smell them. Nope…not going to try that one!