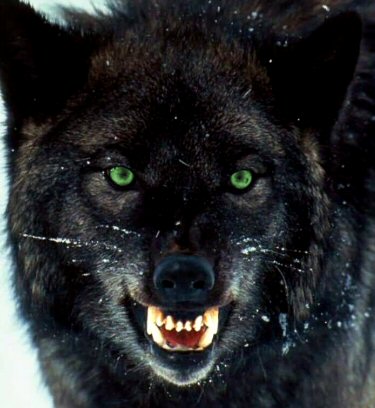 In the 13th century Snorri Sturluson composed a compilation of Norse stories and tales known as the Poetic Edda and Prose Edda. He was an Icelandic historian, poet, and politician born sometime in 1179, he died in 23 September 1241. His greatest legacy are the Eddas which captured Norse Mythology and are still used today as resources for study and capturing the deep oral history of Icelanders.

From Wikipedia:
In both the Poetic Edda and Prose Edda, Fenrir is the father of the wolves Sköll and Hati Hróðvitnisson, [he] is a son of Loki, and is foretold to kill the god Odin during the events of Ragnarök, but will in turn be killed by Odin’s son Víðarr. ~ Fenrir

In Norse Mythology, the Gods have the ability to see the future which gives them a chance to alter its outcome. They see the warnings of Fenrir and grow concerned over his rapid growth. They attempt to bind him, but during the struggle Fenrir bites off the right hand of the god Týr.

The Poetic Edda
In the poem Völuspá, an Oracle (mystical seer) tells Odin that he will be consumed by Fenrir at Ragnarök. Odin’s son Víðarr will then strike at the monster driving his sword into his heart and avenging the death of his father.

Odin tells the seer that he has traveled far and wide but asks the following question:

“Much I have travelled, much have I tried out,
much have I tested the Powers;
from where will a sun come into the smooth heaven
when Fenrir has assailed this one?”

The wise Oracle responds that Sól will bear a daughter before Fenrir attacks her, and that this daughter shall continue the paths of her deceased mother through the heavens.

I’m not fond of the Poetic Edda as they can be a bit confusing for the laymen. These last two verses from the poem seem somewhat disassociated and one doesn’t really seem to answer the other. But the Prose Edda is a different story.

Prose Edda
In these stories an enthroned figure of High provides an example of Týr’s bravery when the Gods lure Fenrir to place the bindings (called the Gleipnir) upon him. The figures of High are three men, which some see as wise men or priestly men of knowledge. The three figures sit upon thrones; High upon the lowest, Just-As-High on the mid-highest, and Third-High on the highest of the thrones.

High explains that as a pledge of promise to Fenrir that they will let him go, Týr placed his hand within the wolf’s mouth. When Fenrir asks to be set free and the Gods refuse, the wolf bites off Týr’s hand at the wrist. That location is now known as the wolf-joint. Now that Týr is one handed he will no longer be considered as a promoter of the settlements between people.

Now that sounds a lot like the Gods tried to enslave the wolf, and through lying to him and breaking their promise he didn’t willy nilly bite off someone’s hand in a struggle, but rather took the false pledge that was given to him as a consequence.

Later in the Prose tales, High describes the God Loki, and says that he had three children with a female jötunn (mythical giants) named Angrboða. The children were Fenrisúlfr (Fenrir the Wolf), the serpent Jörmungandr, and the female being Hel. High also explains that when the Gods discovered the existence of these children they learned of the trouble they would cause to their collective, known as the Æsir. They were very worried about these children because of who their mother was; but even more worried because of who their father was.

Hearing about these children Odin orders them to be captured and brought to him. The serpent is thrown in the ocean waters that surround all lands. He threw Hel into Niflheim, and bestowed upon her the authority over the nine worlds. Fenrir was raised within the home of the Æsir, but only Týr had the courage to feed him.

From Wikipedia again:
The gods noticed that Fenrir was growing rapidly every day, and since all prophecies foretold that Fenrir was destined to cause them harm, the gods formed a plan. The gods prepared three fetters [bindings]: The first, greatly strong, was called Leyding. They brought Leyding to Fenrir and suggested that the wolf try his strength with it. Fenrir judged that it was not beyond his strength, and so let the gods do what they wanted with it. At Fenrir’s first kick the binding snapped, and Fenrir loosened himself from Leyding.

The gods made a second fetter, twice as strong, and named it Dromi. The gods asked Fenrir to try the new fetter, and that should he break this feat of engineering, Fenrir would achieve great fame for his strength. Fenrir considered that the fetter was very strong, yet also that his strength had grown since he broke Leyding, yet that he would have to take some risks if he were to become famous. Fenrir allowed them to place the fetter. Fenrir shook himself, knocked the fetter to the ground, strained hard, and kicking with his feet, snapped the fetter – breaking it into pieces that flew far into the distance.

The Æsir started to fear that they would not be able to bind Fenrir. So Odin sent Freyr’s messenger down into the land of Svartálfaheimr to “some dwarfs” and had them make a fetter called Gleipnir. The dwarves constructed Gleipnir from six mythical ingredients. High [continues the story stating] the fetter was smooth and soft as a silken ribbon, yet strong and firm. The messenger brought the ribbon to the Æsir, and they thanked him heartily for completing the task.

Next we have more treachery from the Gods. They travel to an island and summon for Fenrir to come with them. There they show him the ribbon and explain that although it seems thin, it’s very strong. They each try to pull it apart and cannot. But with Fenrir’s strength, perhaps he can. And if he does not, they will release him from the binding.

At first Fenrir sees no fame or value in tearing the ribbon apart. He notes that if Gleipnir is made with art and trickery, then even if it does look thin, he probably won’t be able to break its magik. Therefore this band is not going on his legs. This is the first sign that he does not trust his companions. The Æsir explain that he has nothing to fear from them and if he does this, they have nothing to fear from him.

Fenrir responds:
“If you bind me so that I am unable to release myself, then you will be standing by in such a way that I should have to wait a long time before I got any help from you. I am reluctant to have this band put on me. But rather than that you question my courage, let someone put his hand in my mouth as a pledge that this is done in good faith.”

Of course the Gods didn’t know what to make of this. None of them had the courage to lose a hand to the wolf. That is until Týr held out his right arm and placed his hand between Fenrir’s great jaws. With the binding on his feet, Fenrir struggled to break free. The more he struggled the tighter the binding became. When the Gods began to laugh, Fenrir knew he had been tricked and he bit off Týr’s hand. 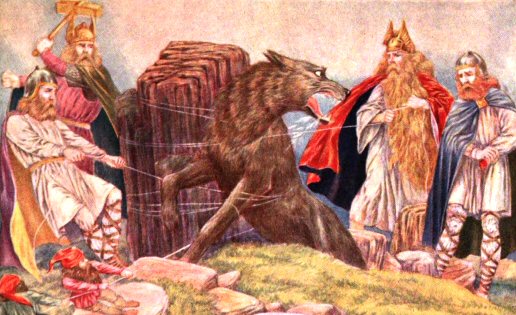 More treachery from the Gods comes next. They tied Gleipnir to a rock and drove it deep into the Earth as an anchoring peg. Fenrir was very angry at the betrayal and he lashed out to bite all the Gods. They responded by thrusting a “certain swords” into his mouth causing the wolf to “howled horribly,” saliva ran from his mouth, and this saliva formed the river Ván (Old Norse “hope”).

As High is telling this story, he is asked why the Gods didn’t simply kill Fenrir. High replies that “so greatly did the gods respect their holy places and places of sanctuary that they did not want to defile them with the wolf’s blood even though the prophecies say that he will be the death of Odin.”

The story continues much later in the Prose Edda when High is talking of Fenrir’s return. Here we learn that although Fenrir is bound to the ground he’s had a family. He has a son named Sköll who swallows the sun and a son Hati Hróðvitnisson who swallows the moon as part of the early events of Ragnarök. When this happens the stars will disappear in the sky, the Earth will shake, trees will be uprooted, mountains will fall, and all binds will snap and Fenrir will be free at last. With his upper jaw touching the sky and his lower jaw beneath the earth, and flames will burn from his eyes and nostrils, Fenrir will come to the field Vígríðr with his brother Jörmungandr who Odin threw into the ocean.

There a great battle takes place as Odin and Fenrir ride to face each other. During their battle Fenrir will swallow Odin and kill him. At which point Odin’s son Víðarr will race forward and attack the wolf. He eventually gets hold of Fenrir’s jaw pulling it apart and killing the monster wolf.

Now I don’t know about you, but I think Fenrir got the short end of the stick here. Seems to me that because Odin liked wolves, he decided to keep Fenrir and raise him with the Gods. It was their own fear of the wolf that caused the initial trouble and betrayal. Fenrir seemed to be level-headed and understood what was going on around him. Why didn’t they talk to him in the first place and explain that his size was becoming a concern instead of using all this treachery to punish him for something he didn’t even do.

If I was bound and pegged to a place forever, I’d get a bit grumpy and irritated too. So I’m kind of glad that it was Fenrir who kills Odin in the end. I think he deserved it. But that’s just me.