“The Link on a Lance”
Maryland Renfaire 2007 by Springwolf

Funny Stories Can Lift Your Spirit

A few years ago, my son and I had a particularly hard week that culminated into one very difficult day. Life was presenting more challenges than either of us could handle alone and at the time, there was no one to turn to. He had his school stresses and I had my big adult life and parent stresses.  The evening was filled with some yelling, from both directions and a lot of “you don’t do this or that”; again from both sides. It was a school night and I had put him to bed with no real solutions or comfort for either of us. At some point you have to stop arguing, because all you’re doing is going in circles and not getting anywhere at all.

While I went to my place for a cry, he was crying in bed. About an hour later he got back up and said he couldn’t sleep because he was too upset. Nothing can wrench your heart out more than your little boy crying because he too was hitting the rocks of despair. The annoyance of him being up nearly two hours after he was supposed to be in bed sleeping, flew right out the door. I knew how he felt. I felt the same way.

He climbed in my lap, we hugged and instead of talking about what we had been arguing about, or frustrated over earlier in the evening, we turned to fill the void of despair. Now everyone has that place they can turn to. It’s different for each person. Some people cook, others eat, some people go for a drive or take a walk. For others they turn to a good book, hot chocolate or a favorite movie.

My main release to escape the world happens on Friday (NASCARs Fast Friday), Saturday (typically the NASCAR Nationwide Race) and Sunday (NASCARs Sprint Cup Race). There’s something about the sound of roaring engines, speed, the race stories the personalities, the pre-race coverage and color commentary. I’ll even tune in to watch a rain delay no matter how long it is. The entire thing simply helps me to forget, release, relax and for a little while forget the boulders of stress we have on our shoulders right now. 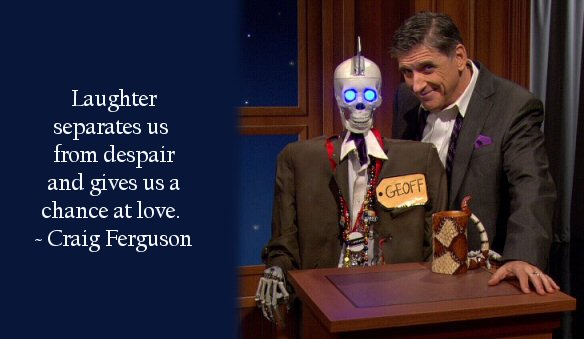 But this was a school night and the man-child doesn’t share my deep passion. For us, on that night, it was  Craig on YouTube. Specifically that’s Craig Ferguson. Scientific studies have been done over the decades about the benefits of laughing to relieve stress, anxiety, sadness and a host of other depressing issues. Laughing produces many benefits according to an article: “Stress relief from laughter? It’s no joke.” at the Mayo Clinic.

We have a few favorites that we’d like to share, in case you have one of those nights or days where you simply need a good laugh to turn the day around. We hope you enjoy them. We certainly do!

The Late Late Show with Craig Ferguson on YouTube:

From sadness to laughter is only one way I lift up my mood and spirit. What about the days when you feel overwhelmed, overburdened, under appreciated, ignored or the target of someone else’s frustrations? Those rainy days and Mondays that make you feel down, unmotivated with the feelings that you simply want to sit down and give up because you’re tired of fighting! The laughter is great, but sometimes I don’t feel like laughing when it seems the world is piling up against me.

On those days I need inspiration, something to reach for, something to motivate me into believing there’s more to life than this and I deserve to attain that dream.

Don’t be contained, be the container!
Your method of travel can be an Armored car, guarded in constant fear,
or it can be a convertible with the top down, ready to fly free!
~ Springwolf

It doesn’t matter what the dream is or how lofty it might be. It maybe a dream that you don’t think I can achieve, but I don’t live to your exceptions. Your limits belong to you, I don’t set limits on my dreams. There are people who will stand on a stage and sing to an auditorium filled with people; even if you don’t think they can. There will be someone who wins that big lottery, it only takes 1 ticket, why can’t it be me; or you? Your limitations of the possibilities in your life will hold you down and hold you back from achieving that dream. Even if you achieve that little practical dream, then what? If you don’t set your sights high, what else will you reach for in life?

In that context, I set my dreams very high. On my About page, I mentioned one of my dreams that inspired the redesign of my blog; a mint colored Range Rover. But the pie in the sky dream? When I feel put down and devalued; I head over to youtube again. 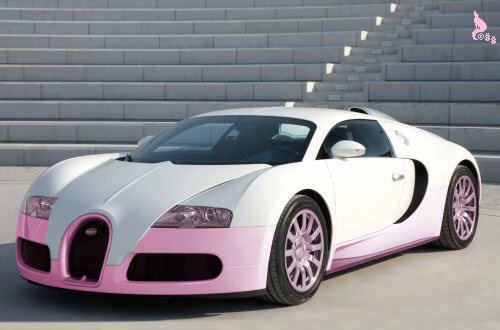 My Personally Designed Bugatti Veyron – Yes It’s Pink – I am a girl after all!

What can I say….I’m the 3rd child of a 3 girl family; I was the boy Dad didn’t have and I like speed. And cars. And racing.

It doesn’t matter what it is that makes you laugh. Fill your void and give you a break from the stress and strain. Tomorrow is another day and you will get through it. Simply keep smiling and remember the laughter you had that turned the day around for you.