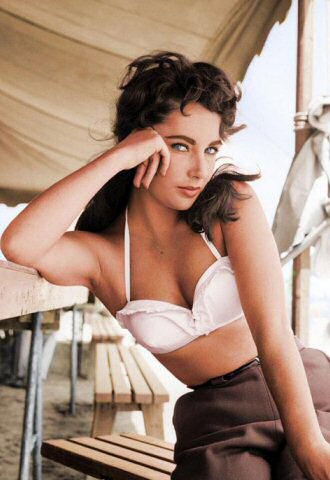 One of our family members shared a link on FB that grabbed my attention. 36 Realistically Colorized Historical Photos article really was worth looking at. They are so well done that the colorization brings the photos and the infamous events to life like I’ve never seen before.

The Mind Unleashed released this article and describe the pictures as:
“A new artistic trend has broken out around the world which changes our perception of history dramatically. Colorizing historic photographs from the late 1800′s and early 1900′s changes their appearance from something historic and different, into a scene from today”.

This one of Elizabeth Taylor looks beautiful. I liked her as an actress and as a person. But the image was a little off; her eyes were green? Say what? She was famous for her violet eyes; and they are violet. I should know, back in the ’80s, I had lunch with her.

Yep. Sure enough. An almost 90 minute picnic lunch. Under a giant shade tree with one of my friends, his family and Liz.  😉

Back in 1981 I was working in an internship at a local company in Reston Virginia. One of the other interns, Russell and I hit it off. He and his wife owned a small farm in a town I’ve always loved, called Upperville. This is prime horse country and right next door to the upper class town of Middleburg. A lot of famous people live out in Middleburg. One of the Smother’s brothers, Robert Duvall, Robert L. Johnson (BET Founder), Joe Theisman lives out in the area and so do many other political folk, CEO and President Business folk. Some stay for a little while, others come in visit and quickly leave the very quiet, calm and beautiful area.

Each year in the Spring the area hosts one of the biggest and most prestigious Steeplechase races known as the Virginia Gold Cup at Great Meadow park. Russell and his family have had season tickets to the races since he was a young child. During this particular running, his sister was going to be out of town and he asked if I would like to go. Oh yeah! I’m a horsey person!!

What a spectacular event it was too. The spectator area was separated by the track itself. The average ticket holder made their tailgating space on the outside of the track and along the few grandstands. The upper crust, had their section inside the track where they could rub elbows with the rich and famous, the riders and horse owners and even a movie star or two.

The race we attended was divided into morning heat races, lunch, which gives the horses time to rest, and then afternoon finals. Russell and his family were part of the inner track crowd and I was in shock and awe for practically the entire day. My family was middle class, we worked hard and this kind of opulence wasn’t part of our lives. But it was really nice to live in it for a day.

During lunch there were tables and tents set up for the inner circle crowd. By the time Russell and crew got our BBQ and what not, most of those tables in the shade of the tents were taken up. When I spotted a picnic table way over there away from everyone, sitting by itself under a big shade tree. Perfect, let’s get over there. It was a bit of a walk, but our crew claimed it and at least we were in the shade. We had started eating, talking and laughing when this older lady came over and asked if she and her husband could share our table. She had a big huge hat on, giant sunglasses and had she not been overweight, she would be a tiny petite little woman.

We had plenty of room, she sat down next to me and we all talked to her for about 20 minutes before she started wondering where her husband was. We talked about horses, famous steeplechase horses that my friend Russell and his family knew and the people who owned then, trained them and rode them. We talked about racing in the state and racing in the UK and a few other places around the world. She was definitely a world traveler, well spoken, funny, at ease and in her element as one would say.

All of the sudden she said “There he is. Excuse me while I yell across the field in an unlady like fashion”. She stood up, started waving her hand in the air to get his attention and yelled “John, over here”.

I looked at the man she was waving at and I said “That’s Senator John Warner”.

She replied matter of factually, “Yes, my husband”.

I looked at her with complete astonishment and said “That makes you Elizabeth Taylor”.

She got the biggest smile, took off her sunglasses and looked right at me, patted my hand and said “Yes dear”.

I almost passed out! Seriously you could have knocked me over with a stick! She had gained a lot of weight when she was marred to John Warner and this was a year before they split and divorced. You wouldn’t have know it was her until she took those giant glasses off. And there they were, the most unusual and beautiful violet colored eyes. She said they change color actually. If she’s in a really good mood and feeling well, they’re a light violet. When she’s tired or under the weather, they become darker and almost a purple-blue.

Then we talked about eyes because she liked my green eyes. My Man calls my eyes “alien eyes” because they’re light green and don’t look real. And she commented that she liked my eyes too. Hey this is Liz Taylor she says she likes something about you and you’re floating on air! We talked about how my eyes do the same thing. If I feel good, they’re a light green, almost the color of a new tree leaf green. When I’m not feeling well they become a much bluer green and get a little darker. Awesome, I have something in common with Liz Taylor. Ok not really but allow me my fantasy.

After that we talked about some of her movies and which ones she like making, and which ones she was proud of. I thought it was very telling that some of her favorite moments in film were with Richard Burton. She was very kind to Sen. Warner when he arrived at our table. He looked us over and obviously decided we were not upper class enough for him and he was distracted the moment he arrived. He didn’t even sit down, he said hi and then asked her why she was sitting all the way over here.

She was polite, but there was a tone in her voice when she said it was the only place in the shade. And then she was obviously annoyed when he wouldn’t sit down with us lower class folk. he kept looking off toward the tent scanning the area for some powerful business man or politician to go talk to. And it didn’t take long before he walked away, with barely a notice or comment to us. He looked at her and said he saw so-n-so and was going to talk to them.

After he walked away, she actually apologized for his rude behavior. She said “He’s going to go press the flesh and beg for money for something he doesn’t need, but has to have.”

Russell’s father was older than anyone at the table and he had no problem letting his feelings out and stated “It’s ok, I didn’t vote for him. Like any republican politician he’s probably more concerned with raising money than talking to real people.”  …ouch!

She laughed and said “You have no idea how right you are.” Right about then he was waving at her to come over to him. She said with a slight snide tone, “It seems my presence is required. Some contributor wants to meet Elizabeth Taylor.” She got up and put her hand on my shoulder and said to all of us, thank you for a wonderful picnic lunch. I haven’t had this much fun with a nicer group of people in a long time.”  And she walked away.

Those last few moments with her really made me feel sorry for her. She really wanted to be treated like an ordinary person having normal ordinary conversations. Not a movie star that’s trotted out when someone wants to show off how prestigious they are because of who they’re married to. After that encounter, I totally understood why she divorced him. They married in 1976 and divorced in 1982.

She sure seemed a lot happier when she got away from him and went back to California. She got back in shape, looked ever more beautiful, and started her charity work for Aids. She was a great woman, suffered through a great deal of tragedy, loss, suffering, drama and still had a smile and a kind heart for others and those who were in need of compassion.

I was sorry and sad when she died. But I really relish that nearly 90 minutes we got to spend with her. Even if we didn’t know who she was for most of it!